A wide range of speakers, such as from GSK and RB, as well as the European Commission, OECD and Deloitte, debated at the AESGP's Annual Meeting in Geneva global self-care policy, how environmental concerns impact industry, ways to ‘nudge’ consumers towards OTCs, and future trends in the market.

A “green wave” of political upheaval that has swept its way over Europe in recent months will change the self-care environment in the region, AESGP director general Jūratė Švarcaitė told delegates at the first session of the association’s 55th Annual Meeting in Geneva, Switzerland.

As young people had taken to the streets to protest climate change, pro-environmental green parties had won wide-spread support at the recent European Parliament elections, Švarcaitė noted. Centrist parties had lost significant ground to greens, as well as to parties on the left and right, she pointed out, which meant there would be new challenges ahead not only for national healthcare systems, but also for the European self-care industry. 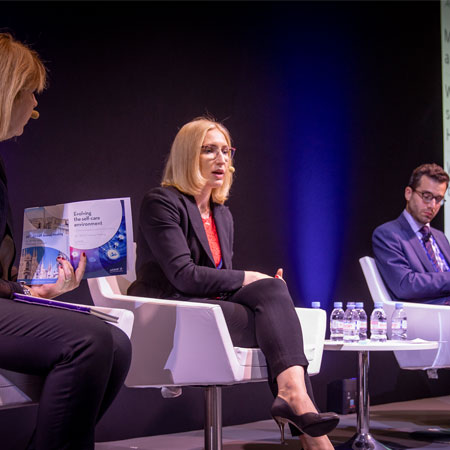 Guillaume Dedet, health economist and policy analyst at the Organisation for Economic Co-operation and Development (OECD), evidenced some of the specific challenges facing healthcare systems, presenting data from the organisation’s most recent ‘Health at a Glance’ report.

According to the report, the average life expectancy of Europeans is now 81 years. While it was right to celebrate this longer life-span, Dedet warned that the headline figure hid some deeper health issues facing Europeans, particularly the disabilities and chronic disease that commonly affected those over 65.

Away from life expectancy, Dedet also outlined a number of “risk factors” facing the European Union. One in five Europeans still smoked daily, he continued, while binge drinking remained a big issue among adolescents, with 40% regularly consuming alcohol in this damaging way. Meanwhile, one in six adults in Europe were obese, and air pollution killed about 250,000 people every year in their region.

Pharmacists had a key role to play in effectively responding to these challenges, insisted Michał Byliniak, the president of the Pharmaceutical Group of the European Union (PGEU).

Patients were having less contact with doctors, Byliniak pointed out, and with pharmacists now the primary interface between patients and their medicines, there was an opportunity for pharmacist consultation to take on a more prominent role in healthcare systems. Furthermore, with future prescription-to-OTC switch candidates likely to target more complex health issues, pharmacists had an increasingly important role to play in facilitating innovation in self-care, he insisted.

Byliniak proposed, therefore, that pharmacist organisations, such as the PGEU, should collaborate more closely with the self-care industry moving forward.

Session 2: How To Respond To Societal Concerns?

The day’s second session was opened with an energizing presentation by Robert Madelin, former head of the European Commission’s Directorate-General for Health and Food Safety (DG Sante) and now chair of Fipra International.

Recalling the societal concerns outlined by previous speakers – in particular protests over climate change – Madelin argued that by “re-framing” risks, companies could turn this upheaval into an opportunity.

Madelin put forward four “optimistic, evidence-based hypotheses” that could help firms achieve this goal: increasing risk literacy, reducing misunderstandings surrounding risk issues, assisting people to make better decisions about matters involving risk, and perhaps controversially, asking people to accept some level of risk in daily activity and helping them build “resilience, self-efficacy and innovative drive.” “If we don’t get this right in the next decade,” Madelin insisted, “it’s not just bad for growth, but also for Europe and its role in the global economy in the next decades.”

Bringing a practical and industry-based perspective to the discussion, GlaxoSmithKline PLC’s DACH general manager Victor Geus asked, “where do we start?” regarding the challenges facing society. 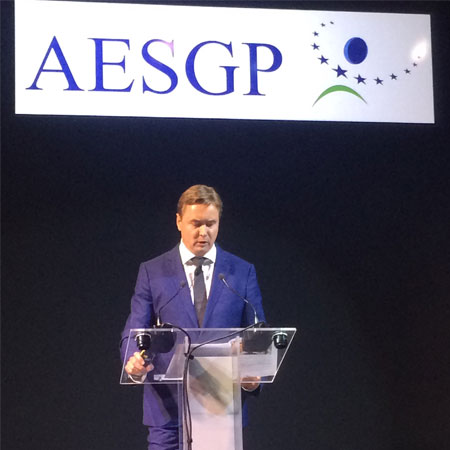 Rather than being overwhelmed, Geus suggested starting locally, with firms initiating change and finding “fellow fanatics” to get the “snowball rolling”.

Geus’ presentation focused on the moves that companies like GSK could make towards sustainable packaging for OTCs, pointing to an initiative in Germany, where local drugstore chain DM had shifted up to half the retail space in its stores towards sustainably packaged products. Getting rid of blister packaging and issuing guidance for the prudent use of medicines to prevent overuse were two ways that firms could further the sustainability agenda, Geus suggested. “GSK has work to do, we all have work to do,” he conceded.

The session was concluded by Caroline Frery, vice-president of global business development at recycling firm TerraCycle, who explained how the company’s Loop project presented the consumer healthcare industry with a way to make a positive impact on the environment in the short-term.

Wth a variety of consumer companies, including healthcare firms like Procter & Gamble Co., Nestle SA and Beiersdorf AG signed up, the Loop shopping platform enables consumers to buy products in refillable packaging which is collected by TerraCycle – often working with the public – cleaned and then re-used by the producing company, thus enabling them to continue consuming but in a responsible manner.

In this model, the packaging could become as important as the product it contained, Frery explained, and actually add value for consumers. While working with initiatives like Loop was an immediate way that firms could improve the sustainability of their products, she argued that in the long term manufacturers would need to think about sustainability at the product design stage.

The penultimate session of the day focused on what the consumer healthcare industry could learn from behavioral economics, made famous by books like Thinking, Fast and Slow by the Nobel Prize-winning economist Daniel Kahneman.

Tiina Likki, principal adviser for UK-based The Behavoural Insights Team, summarized the theory for a lay audience, particularly the way that people could be “nudged” into making decisions that were beneficial both for themselves and for society. Likki suggested that the EAST framework – which stands for Easy, Attractive, Social and Timely – could be applied to the self-care industry to improve both business and social outcomes.

Based on this model, consumer healthcare firms should think about designing environments that “make self-care choices the easy or default option” for consumers, she suggested, and creating products that “mean people get healthier without changing their behavior.”

In India, for example, RB sought to address the problem of public hygiene by not only building 35,000 new toilets in local communities, but also by cleaning up public monuments to raise awareness of the importance of cleanliness. While this campaign had a positive impact on local communities – also supporting the national goal of becoming a “cleaner India” – Faracci pointed out that this significantly raised awareness of and increased loyalty to the firm’s Dettol brand in the country.

That nudging people towards beneficial social outcomes was also good for business contained no contradiction for Faracci, because he explained that the OTC industry was “blessed” as “when we sell our products we do good, we are not selling sugary drinks, we are doing something that helps people.”

The final panel of the day was an opportunity for the Global Self-Care Federation (GSCF) – formerly the WSMI – to outline the results of its seven-month long reflection on the future of the global self-care industry. (Also see "AESGP Annual Meeting, Day 1: Evolving Self-Care In A Changing World" - HBW Insight, 5 Jun, 2019.)

Monitor Deloitte’s Jen Del Carlo – who consulted with the GSCF on its new strategy – explained how a number of “uncertainties” facing industry formed the basis for the discussion, such as the extent to which bricks-and-mortar retailers would be disrupted by their online competitors, for example Amazon, and whether governments would take an evidence-based approach to policy in the face of public opinion, or whether it would react to protests and populism in order to gain favor with voters.

Analyzing these uncertainties, GSCF settled on three key trends. Firstly, “threat to health” imagined a future world in which consumers no longer trusted companies and public institutions, relying instead on alternative media sources for healthcare information.

This was the least optimistic scenario, Del Carlo explained, because this would “increase risk aversion” on the part of governments due to a lack of trust towards increasingly misinformed consumers.

The second trend was more optimistic, predicting a “consumer-driven” future which would see the public take greater ownership of their health, pulling other stakeholders such as health authorities along with them. While in this scenario, self-care would be seen by governments as being more and more beneficial, they would still struggle to keep up with the pace of change, Del Carlo noted, and value for both consumers and firms would not be fully realized.

The third trend, which in its name “self-care, the next generation” echoed the utopianism of science fiction series like Star Trek, hoped that self-care might one day be fully accepted as a foundation of healthcare systems, with governments fully incentivizing and empowering consumers to self-care.

Although this scenario seemed far away from the current situation, Del Carlo pointed to the prominence of self-care in the UK National Health Service’s ‘Long-Term Plan’, and the emphasis on digital health within the US Food and Drug Administration, as evidence that elements of this trend existed today. (Also see "NHS 10-Year Plan A ‘Missed Opportunity’, Says PAGB" - HBW Insight, 10 Jan, 2019.)

The session ended with a fascinating in-depth Q&A session in which the CHPA’s Scott Melville expanded on the work in the US on digital health, as well as an extended discussion on how CBD would be regulated in the future and the GSCF’s role in this.