Senate bill introduced on 19 May, unlike a House bill introduced in February, would direct FDA to allow using hemp-derived cannabinoids in food products as well as supplements. However, neither bill includes language on setting a safe daily level that some industry stakeholders argue is needed. 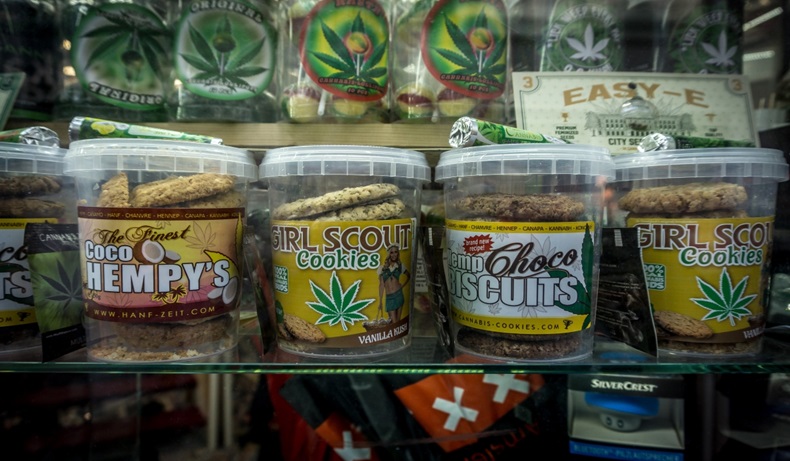 Making lawful the use of hemp-derived cannabinoids in dietary supplements sold in the US could be decided in a food fight on Capitol Hill rather than on whether legislation should include language on setting a safe daily consumption level.

A Senate bill introduced on 19 May, unlike a House bill introduced in February, would direct the Food and Drug Administration to allow using hemp-derived cannabinoids in food products as well as dietary supplements. However, neither bill includes language on setting a safe daily level that some industry stakeholders argue is needed.

Oregon’s two senators, Democrats Ron Wyden and Jeff Merkley, and Kentucky Republican Rand Paul on 19 May introduced the “Hemp Access and Consumer Safety Act,” proposing to change the Food, Drug and Cosmetic Act to allow the FDA to regulate hemp, hemp-derived cannabidiol and other cannabinoids and other ingredients derived from the plant as the agency does other dietary ingredients and food and beverage ingredients.

In addition to not directing the FDA to set a safe daily consumption level, both the Senate and House bills omit language that the agency, in technical comments provided to the House bill authors, recommended adding to specify that any hemp-derived cannabinoid is a new dietary ingredient when used in a supplement. (Also see "US FDA Showed ‘Several’ Cards In CBD Bill Comments – CV Sciences’ Duffy MacKay" - HBW Insight, 14 Dec, 2020.)

The 2018 farm bill Congress enacted in December that year and that became effective in 2019 de-scheduled hemp – defined as cannabis or any part of the cannabis plant containing no more than 0.3% concentration, on a dry weight basis, of tetrahydrocannabinol – as a controlled substance but it maintained the FDA’s oversight of the use of ingredients derived from the plant in product subject to its regulation.

That meant with the FDA previously approving synthetic hemp CBD ingredients as a drug as well as several cannabis-based drugs, its rules prohibited the use of hemp in non-drug products even though hemp no longer was an illegal substance.

The Senate legislation, which has not yet been assigned a bill number, would require manufacturers to comply with all existing federal regulations for supplements and foods and give FDA authority to establish labeling and packaging requirements for products that contain cannabinoids and other substances derived from hemp.

The Senate bill differs from H.R. 841, introduced by Energy and Commerce Committee members Hurt Schrader, D-OR and Morgan Griffiths, R-VA, by the mechanism it proposes to include hemp and hemp-derived cannabinoids as lawful ingredients.

While the Senate bill would create exceptions under the FDC Act, the House bill stated that hemp and hemp-derived CBD “shall be lawful” for use under the act as a supplement provided the materials comply with the FDA’s new dietary ingredient notification requirement and all other applicable requirements including the Fair Packaging and Labeling Act. (Also see "CBD Regulation Bill Filed In US House Again; VMS In Pre-Tax Savings Accounts In First Senate Vote" - HBW Insight, 5 Feb, 2021.)

Additionally, unlike the House legislation, the Senate bill doesn’t set a target date by which the substances will be considered lawful once the legislation is enacted.

The National Products Association agrees with other industry trade groups in supporting adding food products to the legislation. The NPA, in a stance it and some other stakeholders have that differs from other trade groups, maintains that the best approach to regulating CBD is to set a safe level of daily consumption.

“We still have significant concerns with the fact that we’re going to be having potential ingredients and products on the market that are going to be at the same level as a drug,” said Kyle Turk, NPA’s government affairs director.

“I think we definitely need to go after the FDA here and hold them accountable for one, not enforcing products and two, they haven’t set a safe dose level yet and until that happens we’re still going to have a market that we have seen over the last couple years — tainted products, high levels of mislabeled products and things like that,” he said in an interview.

Turk noted NPA lobbied to expand on the House legislation to include food products in the Senate bill.

The FDA, however, hasn’t shown support for allowing cannabinoids as food additives. In late 2019, it stated it is not aware of evidence supporting cannabinoids as generally recognized as safe among qualified experts for use in human or animal food. (Also see "Future Of CBD In Supplements: NDI Notification Looms As Regulatory Path " - HBW Insight, 3 Dec, 2019.)

In addition to casting doubt about using hemp-derived ingredients in food products, the agency’s statement pointed to NDI notifications, as the FDA in 2020 recommended in its technical comments to House members, as the only option for lawful use of the ingredients as dietary ingredients.

Meanwhile, as Congress considers cannabinoids legislation, the FDA continues testing for disparities between labeled cannabinoid levels and the amounts in products, work funded in the agency’s fiscal year 2021 appropriation (see related story below).

‘Certainty’ Rather Than ‘Guessing’

“A lawful regulatory pathway will provide long-term certainty in the hemp-derived CBD market and protect consumers from potentially unsafe products,” said president and CEO Scott Melville in a CHPA statement.

“Americans deserve to have assurances that the hemp and CBD products they include in their food and dietary supplement choices are properly regulated. AHPA supports this legislation since it would clarify the lawful pathways for bringing such products to market,” said APHA president Michael McGuffin.

AHPA, like Merkley, noted that establishing legal pathways also provide “much needed certainty to hemp farmers,” who currently are cultivating hemp for use in supplements and food products without certainty that the FDA will allow their customers to continue making and marketing cannabinoid-containing products.

FDA is testing cannabidiol and other cannabinoids for whether labeled amounts match what’s in a product, says CFSAN Deputy Director Doug Stearn. The work is supported with $5m provided in the agency’s FY21 appropriation.

“Every day that the FDA drags its feet to update its CBD regulations, hemp farmers are left guessing about how their products will be regulated and real economic gains for works and businesses owners in Oregon and across the country are left on the table,” Merkley said in his statement.

Wyden, Merkley and Paul say their bill is intended to take CBD producers out of a “regulatory gray zone.”

“It's been more than two years since I worked with colleagues to have Congress legalize hemp and hemp-derived products. It's long past time for the FDA to get with the program, for the sake of American consumers and farmers,” said Wyden, a chief Democrat sponsor of legislation Congress included in the 2018 farm bill to de-schedule hemp as a controlled substance.

“Hemp-derived CBD products and businesses have earned their recognition in the marketplace, but the FDA, unfortunately, hasn’t treated them like any other food additive or dietary supplement,” said Paul.

The National Industrial Hemp Council also asks why the FDA hasn’t established a regulatory pathway for cannabinoids’ lawful use in supplements and food.

“Last year, nearly $15 billion in economic benefits were left out of the economy because CBD wasn’t regulated appropriately. If the FDA can’t act, Congress should fulfill its oversight role and pass this legislation,” said Patrick Atagi, council chairman.

Regulatory attorneys working in the hemp and cannabis space said following the 2020 elections that with Democrat majorities in the House and Senate, chances for passing the legislation would improve. (Also see "'Historic' Cannabis Legislation Passed By House Would Lift US Cannabinoids Business Roadblocks" - HBW Insight, 18 Dec, 2020.)

Paul also has introduced separate bills to expand the amount of material from hemp plants legal for use in dietary supplements and other consumer health products. Those included his ‘‘Hemp Economic Mobilization Plan” Act introduced in the previous session that would raise from 0.3% to 1% the level of tetrahydrocannabinol by dry weight as the legal definition for hemp. (Also see "Like Kentucky’s Senior Senator, Paul Hoists Legislative Flag For US Hemp Industry Growth" - HBW Insight, 21 Dec, 2020.)

After Aligning With FDA On Cannabinoids, California Lawmakers Move On Lawful Use

US FDA Priorities For Food Safety, Cannabinoid Clear Even With Next Commissioner Unknown