Merck & Co.'s three lovastatin switch attempts showed "it would be essentially impossible to present what they needed just within the confines of those simple boxes,” says Pegasus Research CEO Clark Richardson. Two decades after DFL launched, FDA, labeling experts and other industry stakeholders recognize its limits and have more consumer comprehension study data to guide decisions on what to include as well how to format an OTC label. 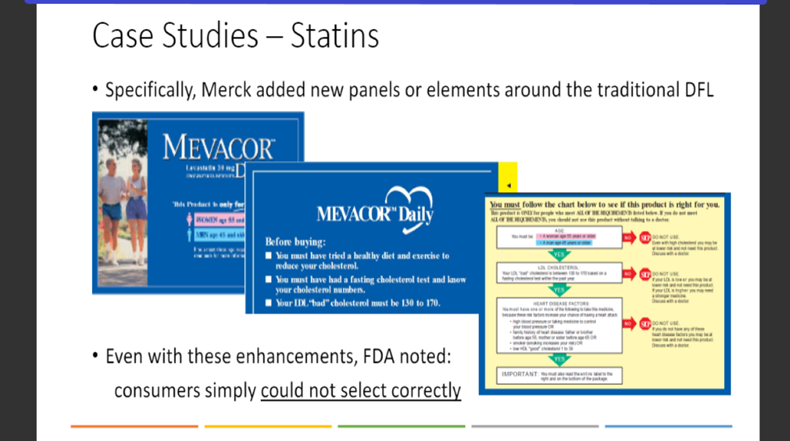 Source: Pegasus Research/FDA webinar Merck & Co.'s modifications to the DFL for its proposed OTC switch of Mevacor in 2007 didn't convince FDA to approve what would have been the first nonprescription drug indicated for a chronic condition.

The futility of using OTC Drug Facts labels for products indicated to treat conditions more complicated than a cold or heartburn, headaches or allergies was apparent less than 10 years after the format was launched.

That was when Merck & Co., Inc. in 2007 made its third and final unsuccessful attempt to switch a version of the cholesterol drug Mevacor (lovastatin/20 mg), says labeling expert Clark Richardson.

“Merck made a valiant effort to innovate with labeling but were constrained by limitations of the DFL. In fact, Merck realized that it would be essentially impossible to present what they needed just within the confines of those simple boxes,” said Richardson during a Food and Drug Administration webinar on 9 June.

Richardson, Pegasus Research president and CEO, referenced Merck & Co three unsuccessful attempts to switch lovastatin, beginning in 2000 and again in 2004 before its final attempt in 2007, as he and other drug labeling experts, from the FDA and from industry and academia, discussed the strengths and weaknesses of DFLs and potential changes for the format required for nonprescription drugs by a 1999 final rule. 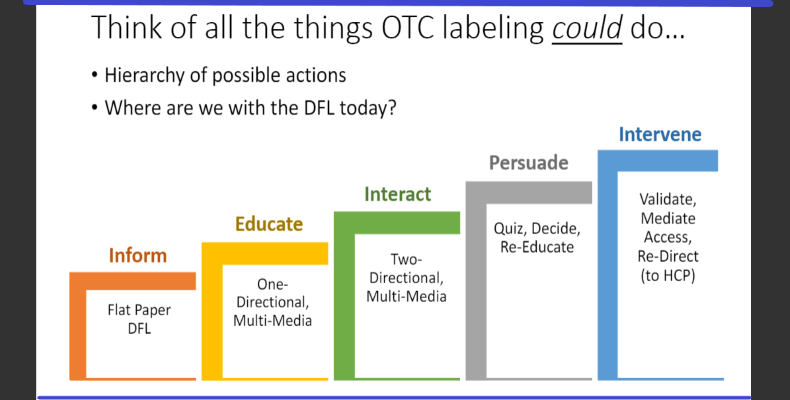 PEGASUS RESEARCH PRESIDENT AND CEO CLARK RICHARDSON OFFERS A DIAGRAM OF STEPS TO SHOW POTENTIAL PROGRESS ON EXPANDING THE UTILITY OF OTC DRUG FACTS LABELS. CURRENTLY, THE "FLAT PAPER DFL” HAS EFFECTIVENESS ONLY TO INFORM AND EDUCATE. “IF WE ASKED THE QUESTION, WHERE ARE WE WITH DFL? I WOULD SAY BASED ON THINGS THAT ARE HERE, WE ARE DOWN SOMEWHERE AROUND THE EDUCATE STAGE. THINK OF ALL THE THINGS THAT OTC LABELING COULD DO IF WE COULD USE OTHER POSSIBILITIES,” HE SAYS. Source: Pegasus Research/FDA webinar

A social science analyst in the FDA’s Office of Nonprescription Drugs, Amanda Pike-McCrudden, stated in her presentation that the agency developed the DFL because it was concerned about how adequately OTC labeling indicated information necessary for safe and effective use of products.

During the 1990s, as the number of OTC drugs increased, consumers faced more difficult and complicated decisions about treating their conditions. As well, labeling had to be clear for low-literacy consumers, including those with low health literacy, and elderly consumers, the heaviest users of OTC drugs.

“There was a need to present information in the most effective and approachable way to ensure that [consumers] could adequately understand and utilize all of the information on the label,” Pike-McCrudden said.

In 2007, FDA advisory committees recommended against approving Merck's third switch application for lovastatin and said more information from "real world" experiences on how consumers make nonprescription selections may be needed to pull off a successful Rx-to-OTC switch of a statin. The first two proposals were made in a partnership with Johnson & Johnson. (Also see "FDA Advisors Say Greater Insight Needed On Self-Selection Of OTC Statins" - Pink Sheet, 17 Dec, 2007.)

Some members suggested Merck should have conducted another actual use study following its unsuccessful 2005 application in addition to modifying the proposed label and performing new label comprehension studies.

Merck & Co. also didn’t succeed in 2014 with an OTC switch NDA for Singulair Allergy (montelukast sodium/10 mg ) for an indication of temporary relief of symptoms due to hay fever and other respiratory allergies, including nasal congestion, runny nose, itchy, water eyes, sneezing and itching of the nose for consumers 18 years and older. The proposed switch was for the same formulation as Rx product Singulair but without the Rx indication of asthma treatment. (Also see "Merck Silence On OTC Singulair Speaks Volumes On Switch Outlook" - Pink Sheet, 11 Dec, 2015.)

Two decades later, the FDA as well as labeling experts and industry stakeholders recognize problems with the format and have much more data from consumer comprehension studies and other information to guide decisions on what to include as well how to format an OTC label.

“When the new format was created, there was not much information to pull from in terms of data. Now, we have over 20 years’ worth of experience of data to use to design the next format,” Pike-McCrudden said.

“I think we are in a great place to put all of the knowledge to use for us and come up with DFL that really works to get important information across to consumers in approachable and comprehensible way.”

As other speakers noted during the day-long webinar, Richardson said DFLs’ shortcomings are particularly obvious in the comparatively small number of OTC switches over the past decade, 41.

He said the approved switches “categories of conditions most are to treat symptomatic, self-recognizable and episodic or self-limiting conditions,” and the current DFL “is great and it does well for that.”

“There are very few conditions within this that are less traditional, that may be more preventative or may treat conditions that are more chronic or ongoing.”

The DFL generally is best-suited for straightforward indications, those that are symptomatic, self-recognizable, episodic or self-limiting, Richardson said. A flat, one-dimensional DFL with highly structured headings and little flexibility allowed for content typically will work with those indications.

“That rigidity creates obstacles for conditions that are difficult to self-recognize or diagnose that are chronic, require external testing or validation, and medications that are preventative or have complex or difficult-to-recognize contraindications. In those cases, for those medications the DFL is like a vehicle that is overloaded and unwieldy and in this case precariously ineffective,” he said.

The FDA encourages drug firms and other stakeholders to study making available nonprescription drug ingredients indicated for chronic conditions, such as Merck & Co.’s new drug applications for lovastatin. In 2012 the agency opened a docket for recommendations on changing its OTC switch NDA rules to allow for “novel switches” targeting chronic conditions. (Also see "Before Asking FDA For Novel OTC Switch, Be Sure DFL Alone 'Can't Get There'" - HBW Insight, 23 May, 2019.)

Webinar on DFL requirements was a good launch toward potential changes, says CDER Office of Nonprescription Drugs Director Theresa Michele, "This is a great opportunity for us. I think we are on the cusp of a lot of neat things in the OTC marketplace."

Agency officials launched the initiative stating that labeling for novel switches would be subject to the same limits as other OTCs, with all necessary information available on a product’s label. However, the FDA has since indicated in a 2018 guidance that switch sponsors could tap into digital media and other extra-label tools to help demonstrate that consumers can assess whether an OTC drug is appropriate for them and they can use the product safely. (Also see "Innovation In OTC Switches Takes Multimedia Approach In US FDA Draft Guidance" - HBW Insight, 17 Jul, 2018.)

Since Pfizer pulled its atorvastatin switch NDA in 2015, the FDA has approved multiple t OTC switch proposals, all indicated for conditions that comparatively more simple for self-diagnosis. The most recent came in October 2020, the FDA’s fifth in the year, for Arbor Pharmaceuticals, LLC’s supplemental NDA for a full switch of its Sklice (ivermectin 0.5%) lice treatment to OTC. (Also see "In Latest US OTC Switch, Ivermectin 0.5% Lice Treatment Becomes Fully Nonprescription" - HBW Insight, 27 Oct, 2020.)

“We may be asking the flat, static DFL to even help people recognize undiagnosed condition which is a tall order,” Richardson said.

“To achieve higher possibilities, we need to liberate ourselves from a rigid, flat DFL and add additional innovations and ancillary capabilities. We know, especially for complicated candidates, this format simply can't accommodate nontraditional drug candidates. We have stretched it to its limits,” he added.