So many customers have told aloe vera supplement manufacturer Desert Harvest Inc. that its concentrated extract helps lessen symptoms of interstitial cystitis, CEO Heather Florio says the company is attempting to have its formulation approved as a drug in the US.

Desert Harvest also is aware that potential approval of its aloe vera extract as a drug would create a regulatory and economic conundrum for other US aloe vera supplement marketers as well as for the Food and Drug Administration (see box below).

Desert Harvest, based in Bar Harbor, ME, in June 2021 received approval from the Food and Drug Administration to research its ingredient as an investigational new drug for IC treatment.  The firm also has FDA and Wake Forest University Institutional Review Board approval to conduct a double-blind, placebo-controlled Phase 2 clinical trial on its aloe vera extract’s efficacy. 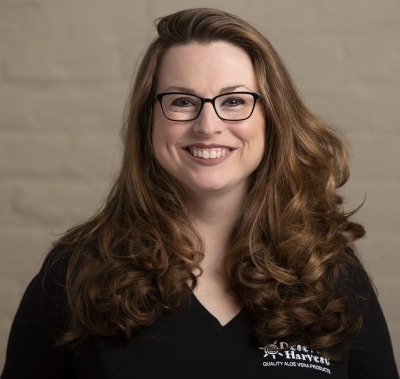 desert harvest ceo heather florio: “We had many requests for many urologists, gynecologist and neurologists around the United States asking us to be a drug." Source: Desert Harvest

The Phase 1 study, conducted at Wake Forest Baptist Health, part of Wake Forest University Institute of Regenerative Medicine, in Winston-Salem, NC, and expected to be completed in late 2022, includes 100 patients receiving for six months a regimen of either Desert Harvest Super-Strength Aloe Vera Capsules or a placebo.

The study will measure changes in IC symptoms, suprapubic pain, urinary frequency, sexual functioning and satisfaction, and perceived quality of life; a portion of the study also will examine the impact of increasing and decreasing dosage.

Desert Harvest, which developed its Super-Strength Capsules with 600 mg 100% organically grown aloe vera specifically to help people suffering from interstitial cystitis, says multiple studies have shown the product helps relieve IC symptoms such as pelvic pain, urethral burning, and urgency and frequency of urination in a large majority of patients.

A 1995 double-blind, placebo-controlled study conducted with the Urology Wellness Center in Rockville, MD, found 87.5% of patients who completed the study experienced relief from some symptoms, with 50% experiencing significant relief and able to return to a more normal lifestyle.

Just as FDA regulations prohibit using cannabis- and hemp-derived ingredients in food and dietary supplements as drugs because those substances have been studied or approved as drugs in the US, a potential approval of an aloe vera-based drug would exclude the ingredient from use in food and supplements.

All food and supplement products available in the US containing cannabidiol and other hemp-based cannabinoids are unlawful but the FDA is allowing sales under enforcement discretion while the agency and lawmakers consider how to make the ingredients lawful for use in non-drug products subject to FDA regulatory oversight (Also see "Hemp Ingredient Filter Recommended Before Lawful Use Allowed In Supplements In US" - HBW Insight, 5 Dec, 2021.).

The FDA’s policy for allowing sales of red yeast rice supplements also could be a model for regulation of a potential market with aloe supplements available after approval of an aloe drug. After red yeast rice extract had been used in food for health benefits for hundreds of years, FDA approved a high-cholesterol drug made from a high concentration of the ingredient and ordered a halt of sales of the supplements.  (Also see "Red Yeast Rice History Offers Blueprint For Clearing CBD As Dietary Ingredient" - HBW Insight, 24 May, 2019.)

A supplement firm’s complaint against FDA’s position reached a federal appeals court, which sided with FDA, but the agency allowed marketing of supplements with lower levels of the active ingredient and without cholesterol claims.

“We’re doing the safety and the efficacy studies, we're showing that our product is safe because of what we do to it in high doses and long term. … The difference will be not only the molecular makeup of the product, but also just the milligrams in and of itself.”

Florio notes results from the 1995 study and the 2016 survey in pointing out that Desert Harvest has another reason for researching its supplements as a potential IC treatment. That is offering consumers a lower priced and more effective treatment than the currently available drug indicated for IC treatment, pentosan polysulfate sodium.

According to Desert Harvest, “The most comprehensive study of pentosan polysulfate sodium found that just 54.2% of participants reported a 50% improvement in IC symptoms.”

Johnson & Johnson’s Janssen Pharmaceuticals Inc. has had approval for 100-mg pentosan polysulfat drug indicated for IC treatment, branded Elimiron, in the US since 1996. ([A3/PS122107])

“We had many requests for many urologists, gynecologist and neurologists around the United States asking us to be a drug specifically because Elmiron, the only FDA-approved drug to treat interstitial cystitis currently on the market, is undergoing class action litigation,” Florio said.

Research published since 2017 has linked Elmiron potentially to vision problems that might lead to permanent vision loss; Janssen faces multiple damages complaints from consumers who allege they developed maculopathy after taking the drug for extended periods.

“It was already known it had a lower efficacy rate than our product … and ours doesn’t have side effects. But this was this drug of choice on [health plan formularies]. This is what they had to offer, and this is typically what was offered most often,” Florio said.

“Doctors were being questioned more and more and we got many, many requests to take this into drug status long before we decided to make that move,” she added.

In addition to its 600-mg aloe vera extract capsules, which also contain 20-mg calcium carbonate to alkalize any acidity, Desert Harvest uses aloe in other supplements and vitamins and in hair and skin care products it makes and sells.

Desert Harvest’s motivation to study using its ingredient as a potential drug isn’t limited to requests from doctors and customers. From its start in Colorado, the firm has researched potential health benefits from aloe vera.

“These aren't like what you would typically find in a health food store. … For us, we have always been very scientific research based,” Florio said.

“We work directly with our chemists. We developed a very, very unique formula in the sense of how we process it, what we do with it. We're all about maximizing nutrients, removing unsafe ingredients, we follow it all the way from field to bottle literally.”

Where Desert Harvet grows its aloe plants and in which soil also come from its research. “We've looked for volcanic soil because it's going to increase the nutrient content,” said the CEO, the daughter of the couple who founded the firm.

“Within 20 minutes of harvest, we are in there processing, preserving those nutrients with our patented process. On top of that we have a patented process to filter out the anthraquinones, these are latex chemicals naturally an aloe vera and they act as an irritant to the colon and long term has been proven in studies to be carcinogenic to the colon, and also liver damage kidney damage.”

Florio says filtering anthraquinones differentiates Desert Harvest from most firms in the aloe product space, and the processing step differentiates its products for longer-term use.

“Probably most aloe products out on the market today have these in there. You'll see things like digestive aid, sometimes it's promoted for weight loss. These are meant to be, and this is what most aloe vera on the shelves are, for short-term use, you know, small bursts,” she said.

OTC Marketing Awards 2022: What The Judges Said About The Leading Entries

P&G Leaders On Precision Digital Marketing, Why Less Can Be More