Sale is among options it’s considering for materials business, which is currently “managed largely on a standalone basis.” Its health, nutrition and bioscience segments account for 80% to 85% of total sales and will operate as individual business groups. 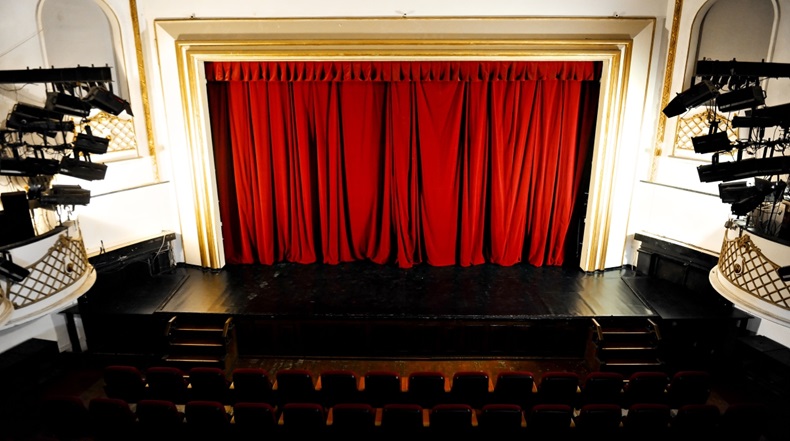 Royal DSM NV is pulling down the curtain on being a multinational known as an industrial chemicals and materials business that also provided consumer and animal nutrition and health care ingredients as it is pivots to focus on health, nutrition and bioscience.

The firm announced on 14 September that a sale is among the options it’s considering for its materials business, which it describes in a presentation as currently “managed largely on a standalone basis.”

Co-CEO and chief financial officer Geraldine Matchett said in a same-day briefing with analysts that DSM’s health, nutrition and bioscience segments currently account for 80% to 85% of its revenues. Investors likely realize that and would align with the firm’s plan to focus on those businesses.

DSM is “making the decision today to be more explicit than we have ever been before that we're heading towards this pure health, nutrition, bioscience company,” Matchett said.

Dsm emphasizes the diversity of its offerings that will be included in its nutrition, health and care business, which analysts expect the firm will expand with acquisitions. Source: Royal DSM

In addition to its business reorganization, DSM announced environmental and societal “quantifiable commitments” concerning making changes in the production and consumption of food by 2030. It says its “measurable food system commitments” are areas where it believes it and its business partners can make the greatest impact together (see box below).

DSM says it will begin reporting results according its new structure starting in January 2022. Each of the three businesses’ results will be reported separately within its overall results.

As “market-focused” businesses, each group, it says, will be closer aligned with its customers while continuing to work with DSM’s innovation center to develop impactful, science-based and market-ready innovations.

Co-CEO Matchett noted during DSM’s briefing that on 23 September, coinciding with the United Nations Food Systems Summit, the firm will launch a campaign “with a lot more information, a dedicated website on all of our commitments, but also our ambitions.”

“I would say watch that space because next week, we will be building on the information flow in the context of the UN Food Systems Summit,” she said.

DSM says the “multiple systemic and interconnected food system challenges” the growing global population is imposing on consumer, animal and environmental health can be solved with “realistic scalable solutions” from digital technology and bioscience.

It says its health, nutrition and care business is “ideally positioned to capture these opportunities” with its “scientific competences and growing portfolio of nutrition and health solution.”

The portfolio currently includes products with around €2.5bn ($2.95bn) annual sales, according to DSM.

It describes its presence in ingredient supplies for each of those categories as “the leading player” collaborating with customers providing early-life nutrition products, dietary supplements, pharma, medical nutrition, personal care, fragrances, biomedical materials and nutrition improvement for vulnerable communities.

It offers ingredients including ampli-D rapid-acting vitamin D and algal lipids and provides personalized nutrition technology through Hologram Sciences, which it launched in April with a $100m investment, and human milk oligosaccharides (HMO)-prebiotics through Glycom A/S, which it acquired in 2020.

The food and beverage business, combining the food, beverage and pet food activities of the current DSM food specialties and nutritional products divisions, represents more than €1bn ($1.2bn) in annual sales. Its portfolio includes innovations such as EverSweet, a natural calorie-free sweetener, and CanolaPRO, a plant-based alternative protein.

DSM recently announced it is acquiring, dairy-based flavorings provider First Choice Ingredients, will be part of the food and beverage business pending regulatory approval of the deal.

The animal nutrition and health business, accounting for more than €3bn ($3.5bn) in annual sales, will focus on solutions for “a radical, yet achievable, transformation in the sustainability of animal protein production,” according to DSM.

DSM DETAILS 10 YEARS OF ACQUISITIONS IN THE NUTRITION, HEALTH AND BIOSCIENCE MARKETS ANNOUNCING ITS PLAN TO FOCUS ON THOSE BUSINESS AREAS AND POTENTIALLY SELL ITS CHEMICAL MATERIALS BUSINESS. Source: Royal DSM

It will include the recently acquired Erber Group, an Austrian supplier of eubiotics and mycotoxin risk management, and DSM’s current portfolio of methane inhibitor Bovaer and fish-oil algae-alternative Veramaris. The business also includes initiatives with data-driven decision-making tools for farmers, veterinarians and animal health practitioners.

Market analysts have anticipated an organizational change at DSM, though separating the nutritional and health care businesses was considered as likely as getting out of the materials market.

During the firm’s briefing, ING Groep NV’s Reginald Watson told DSM executives that “investors have been clamoring for, for quite some time” for information on a reorganization. 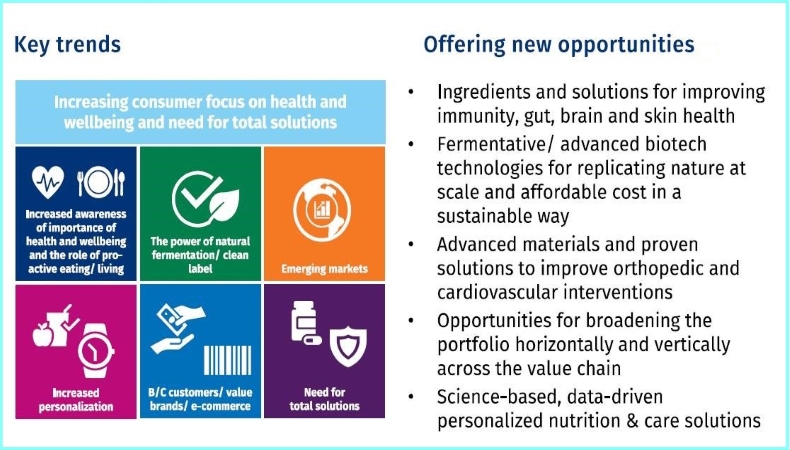 dsm says its health, nutrition and care, food and beverage and animal nutrition and health businesses are positioned to capitalize on market opportunities generated by consumer trends. Source: Royal DSM

Watson also suggested to the executives that a potential sale of the materials business might not be enough to significantly boost net income growth.

He said “it seems like there's sort of an awful lot of effort going into realigning, streamlining DSM, but it's not leading to necessarily any change at the bottom line for shareholders.”

DSM’s health, nutrition and care business isn’t the largest of the three groups established in the reorganization but likely will be where the firm focuses most of its expansion investment. It has added to its nutrition operations in recent years, including gaining access to hemp-derived cannabinoid ingredients through a partnership announced in June with Mile High Labs International Inc. (Also see "DSM Remodels Nutrition Business With Fundamental Piece – Cannabinoid Ingredients" - HBW Insight, 15 Jun, 2021.)

With its 2020 full-year results in February, DSM said in nutrition it “sees significant headroom for business growth and innovation.” Matchett said during an earnings briefing the business is on track for progress DSM projected in its “Fit for Growth” program launched in w019 to drive above- market profitable growth through simplifying its operations and improving business steering. (Also see "With ‘Significant Headroom For Growth,' Is Standalone Space Ahead For DSM Nutrition?" - HBW Insight, 17 Feb, 2021.)

The firm also spent on raising nutrition’s profile in its overall business. The spending included the October launch of a brand campaign targeting the human nutrition and health markets and reflecting DSM’s strategic direction as an end-to-end partner within the value chain.

Additionally, in November it launched a collaboration with Chinese firm Huami Corp. to develop wearable technologies and health tracking for personalized nutrition. The firms are combining Humai’s Amazfit wearables and PAI (personal activity intelligence) score with DSM’s AVA digital platform, which it acquired in 2019.

Calling the move “a step change” and “potential disappointment,” Watson said it “hasn't led to anything tangibly different to the bottom line.”

Bernstein analyst Gunther Zechmann said in a same-day note he expects the material business will draw offers of more than €4bn. “We expect DSM to acquire more businesses in Nutrition as well as further share buy-backs,” he said.

Calling the move “the last step in DSM's equity story into a pure-play consumer” multinational 120 years after its start as Dutch State Mines, Zechmann said it will compete with pure-play peers including Kerry Group.

While the “timing of the announcement was earlier than investors would have likely anticipated,” the change “has been a long-felt wish by investors” and “likely a flurry of acquisitions” will follow, Zechmann said.

At Morningstar, analyst Rob Hales in August described DSM as “heavily weighted toward nutrition, with less emphasis on chemicals” as a result of its acquisitions, with additional deals expected primarily in the nutrition business.

Additionally, no small part of DSM’s business is for commodified ingredients, which puts an emphasis on broadening its nutritional offerings.

Hales said DSM “is also moving up the value chain through its premix business, which we think is wise, given that production of basic vitamins is becoming commodified.”

But currently “DSM is weighted to the lower end of the value chain, which includes production of the basic active ingredients” and providing those nutrients in multiple formats, an area “largely commodified, with competition based on price,” according to Hales’ research note.

He pointed out vitamin E was “previously the company’s most profitable nutritional ingredient by a wide margin” before high margins for the product “attracted an influx of Chinese competition, which sent prices into free-fall.”

The pre-mix business, nutritional blends ingredients based on customer requirements, is a higher-value activity but still subject to competition offering lower-priced options and potentially higher material costs. Currently, though, pre-mix accounts for around 25% of DSM’s human nutrition sales, or 10% of the entire nutrition segment.

“Premix arguably has more value-add in human nutrition. The increasing pace of changing consumer preferences has led to food and beverage companies becoming more dependent on suppliers for innovation, leading to a more collaborative effort toward research and development,” Hales said.

The announcement sparked trading at twice the average volume in Amsterdam and pushed DSM's share price to near its high for the past year as well as jumping it up from the range across the previous four days of  trading.

With ‘Significant Headroom For Growth,' Is Standalone Space Ahead For DSM Nutrition?

People On The Move: Appointments At CRN UK, EMA, Boots