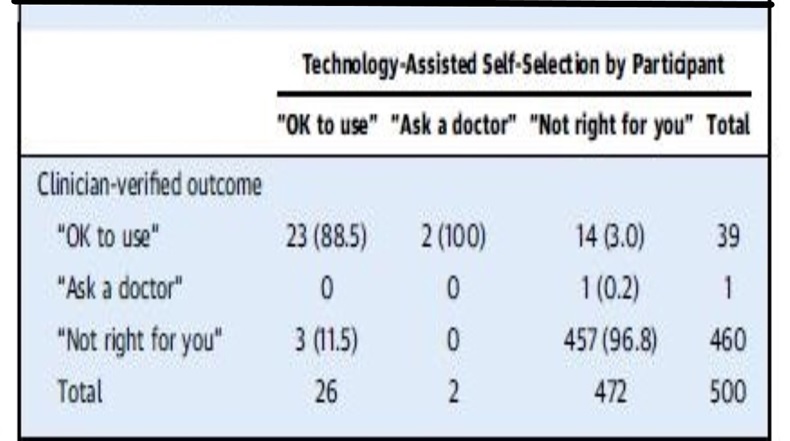 Source: Journal of the American College of Cardiology Comparison of technology-assisted self-selection outcomes obtained by participants and clinicians at research sites in study of consumers' OTC access to Crestor.

The chances for OTC switch proposals for statins in the US could improve based on results of a study funded by AstraZeneca PLC showing consumers using an online tool appropriately self-selected the firm's Crestor.

The study published recently in the Journal of the American College of Cardiology also could be a bellwether for switch applications for other types of drugs for chronic health conditions which have remained Rx-only largely due to concerns that consumers won’t accurately determine, based only on information in OTC Drug Facts labels, whether they should use a drug. 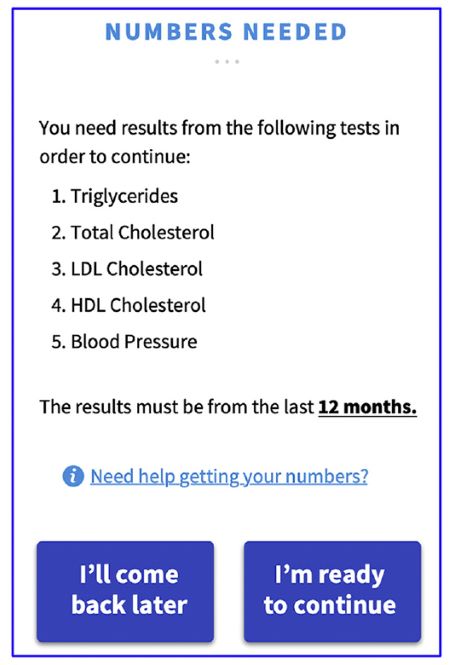 app INFORMS CONSUMER THAT RECENT LIPID VALUES AND BLOOD PRESSURE ARE REQUIRED. Source: all images,  Journal of the American College of Cardiology

“A novel strategy using a web application for self-selection was highly successful with [greater than] 95% concordance for the primary endpoint that compared results obtained by participants and an independent clinical assessment,” the researchers stated in the study published in September.

The research was led by cardiologist and health care innovation advocate Steven Nissen, of the Cleveland Clinic Department of Cardiovascular Medicine, with a team including Howard Hutchinson and Melanie Morris from AstraZeneca Biopharmaceuticals, the British pharma’s US business in Wilmington, DE.

Sponsoring the study reflects AstraZeneca’s interest in expanding its revenues from Crestor (rosuvastatin) with potential approval for OTC sales in the US as well as other countries where the product’s available.

It would license OTC rights for Crestor to another pharma, as it has with other drugs it markets Rx, including Prilosec OTC (omeprazole) marketed by Procter & Gamble as the first proton pump inhibitor available OTC in the US and Rhinocort Allergy Spray (budesonide) marketed by Johnson & Johnson.

AstraZeneca also licensed OTC rights for the largest-ever-selling Rx drug, Lipitor(atorvastatin), to Pfizer Inc., which began a clinical trial to support a switch new drug application before pulling the plug on the project due to concerns about consumer self-selection. (Also see "Light Still On For Switches After Pfizer Pulls Plug On OTC Lipitor" - HBW Insight, 3 Aug, 2015.)

The researchers said expanded access to statins “could have a significant positive public health impact given the benefits of these drugs in primary prevention and the observation that as many as one-half of patients who are guidelines eligible for statin therapy are not treated.” 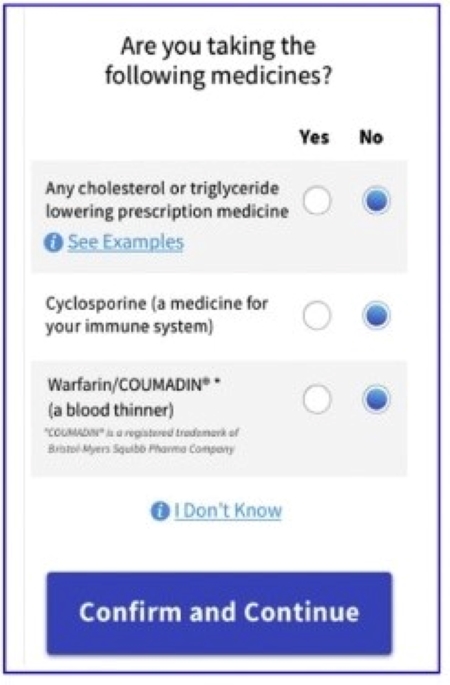 app SHOWS AN INQUIRY ABOUT MEDICATIONS THAT WOULD MAKE PATIENT INELIGIBLE FOR OTC STATIN TREATMENT.

However, they also explained the study “does not provide a robust assessment of technology-assisted self-selection in identifying patients most likely to benefit from nonprescription statin therapy.”

They recommend that additional studies enroll participants who would be eligible for OTC atorvastatin to more narrowly evaluate technology-assisted self-selection for the ingredient.

Conducted with 500 subjects – 83 with limited literacy, having a seventh- or eighth-grade education level – the study presented an online app to assess appropriateness for treatment with 5-mg rosuvastatin (see images for app screen above and below).

The app was designed to assess eligibility for a “moderate-intensity” statin based on current guidelines and to deny access to individuals with contraindications to rosuvastatin.

Participants’ selection for statin therapy determined through the application was concordant with clinical selection in 481 of the 500, with 23 deemed appropriate and 458 inappropriate for treatment, the study notes.

Study participants with limited literacy also had a high concordance with the clinician’s assessment. “This outcome is potentially important because limited literacy consumers may have less access to health care providers and may benefit from enhanced efforts to deliver medications directly,” the researchers said.

The subjects also visited a research site where clinicians, blinded to data from the web app, completed their own online application assessment of the subjects, programmed for one of three rosuvastatin treatment outcomes: “Okay to use,” “not right for you” or “ask a doctor.”

Participants’ selection for statin therapy determined through the application was concordant with the clinicians’ opinion in 481 of the 500, with 23 deemed appropriate and 458 inappropriate for treatment, the study notes.

A “not right for you” assessment for 458 subjects was expected; the study was designed to enroll a wide variety of participants, including persons with cardiovascular disease, to provide information on whether subjects who shouldn’t use the drug would reach ineligible conclusions on their own. 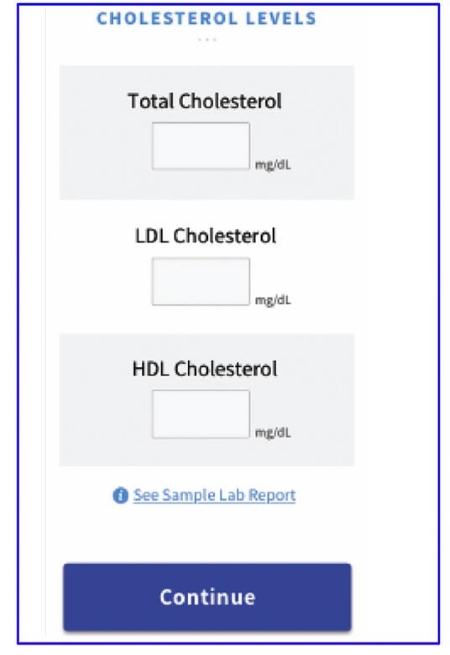 Discordance was due to incorrect self-selection (“okay to use”) in three cases, incorrect rejection (“not right for you”) in 14 and an incorrect “ask a doctor” outcome in two.

The most common reasons for not qualifying included already using cholesterol- or triglycerides-lowering medications; a low cardiovascular score; or low-risk demographic characteristics.

Discordant outcomes were assessed to understand the “root cause” of the differences, researchers said. Causes largely traced to the subjects’ error while interacting with the application, such as incorrectly identifying as taking a statin or failing to recognize a family history of heart disease.

The sudy’s online app was developed using FDA’s guidance for software as a medical device, an approach “designed to overcome the problem of poor compliance with the [drug facts label that undermined prior efforts at regulatory acceptance,” the researchers said.

If subjects met the criteria for using the OTC drug, the app is designed so they could purchase the 5-mg rosuvastatin online, have it shipped to them and also have eligibility for reordering. The medication offered in the study would not be available in stores.

He led the Long-Term Outcomes Study to Assess Statin Residual Risk with Epanova in High Cardiovascular Risk Patients with Hypertriglyceridemia (STRENGTH) trial, which generated results including daily supplementation with omega-3 fatty acids compared with corn oil resulted in no significant difference in a composite outcome of major adverse cardiovascular events, according to a December 2020 report in the Journal of the American Medical Association. (Also see "STRENGTH Results May Weaken Chances For Omega-3 Fatty Acid Heart Health Claims" - HBW Insight, 4 Dec, 2020.)

ADAPT was stopped in 2004 before its completion after concerns surfaced about a link between celecoxib and cardiovascular risks found in a separate trial of celecoxib's effect on colon polyps. The NIH also issued a warning about naproxen safety after a review of the preliminary trial data demonstrated a 50% increase in risk of cardiovascular events linked to the NSAID.

Further, as adherence to Rx statin treatment is poor, with less than 50% of patients continuing to recieve therapy after one year, an online app approach “provides continuing contact with the consumer to encourage compliance and enable ongoing confirmation of eligibility,” the study added.

OTC statin switch proposals haven’t succeeded in the US due to failing to demonstrate consumers could appropriately self-select.

The failures largely can be attributed to sponsors’ reliance on entirely on drug facts labels (DFLs) to guide consumers, even though “the majority of consumers do not read the drug facts labels for OTC products” prior to actual use, according to Nissen and his colleagues.

In 2015, Pfizer opted not to file an NDA for a 10-mg Lipitor over concerns consumers wouldn’t accurately self-select and safely use the products. The trial didn’t meet its primary objectives of showing patient compliance with the direction to check their low-density lipoprotein cholesterol level and, after checking, to take appropriate action based on test results.

Other factors influenced Pfizer’s decision to exit the consumer health sector, but the failure of its Lipitor switch plan likely was among the last straws before the firm put the division up for sale and separated it after not receiving satisfactory offers before agreeing in 2018 to combine its OTC drug and nutritional products lines with GlaxoSmithKline plc’s in a joint venture GSK operates with 68% ownership. (Also see "GSK And Pfizer Start Consumer JV For Different Reasons, Aim For Similar Goals" - HBW Insight, 19 Dec, 2018.)

The FDA, pharma industry stakeholders and consumer health advocates recognize some problems with OTC DFLS are worse than others and some likely can be corrected with minor changes to the format.

However, changes for supporting OTC labeling for drugs currently available Rx-only and indicated for high-cholesterol and other chronic, more complicated conditions, aren’t minor and won’t happen within the limits of one-dimensional text media printed on nonprescription drug containers, packages and inserts, labeling experts agreed during FDA workshop earlier in 2021.

The FDA's Office of Nonprescription Drugs opened a docket – FDA-2021-N-0353 – for potential changes in DFL requirements when it announced the workshop in April. Since publishing the DFL final rule, the FDA at multiple times has added to it or changed requirements for information, typically related to certain ingredients. (Also see "NSAIDs Marketed In US Will Have Stronger Label Warning About Risks During Late Pregnancy" - HBW Insight, 15 Oct, 2020.)

Agency officials launched the initiative expecting labeling for novel switches to be subject to the same limits as other OTCs, with all necessary information available on a product’s label.

However, the FDA indicated in a 2018 guidance that switch sponsors could tap into digital media and other extra-label tools to help demonstrate that consumers can assess whether an OTC drug is appropriate for them and they can use the product safely. (Also see "Innovation In OTC Switches Takes Multimedia Approach In US FDA Draft Guidance" - Pink Sheet, 17 Jul, 2018.)

Innovation, Education Are CHPA Priorities To Help Consumers ‘Own’ Their Health Through Self-Care